Dates for your diary 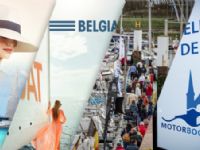 Busy times for the De Valk boat show team as we get ready to exhibit at four top events. Where shall we meet?

First up is the six-day Cannes Yachting Festival, which kicks off on Tuesday 11 September. Now attracting over 50,000 visitors, Cannes is probably Europe’s largest boat show with over 600 on display. In addition to profiling some of the latest gems on our books, De Valk will be representing Astondoa and Vanquish Yachts in style. Show details here.

The Belgian Boat Show Float is an extension of the Ghent show and held in the harbour of Breskens. From Friday 5 to Sunday 7 October, this in-water event will be focused on sailing yachts over 10 metres in length. Last year Float attracted over 4500 visitors and was a considerable success. More info is available in Dutch and French on this site.

Next up is the Nieuwpoort International Boat Show, which will run two weekends later from 19 to 21 October. Featuring a wide range of boats, this three-day show is located in Northern Europe's largest marina. Now in its 15th year, the Nieuwpoort show lives up to its international billing and has become a very professional event. It also has a website in English, Dutch and French here.

On the first weekend of November, from Friday 2 to Sunday 4, the largest show in the north of the Netherlands will open its doors. With over 400 new and pre-owned motoryachts on display, the Motorboot Sneek show attracts thousands of visitors. This is a top event for De Valk as we also open up our sales marina in Sneek and we look forward to welcoming you there. Click here for more info on the event.